When someone mentions Michigan, what’s the first thing that springs to mind? I’d wager most of my net worth that it’s not castles. Surprisingly, however, Michigan has a number of famous castles that are worth a visit. Still skeptical? Let’s clear a few things up.

What technically constitutes a castle?

According to Merriam Webster’s dictionary, a castle is a large fortified building or set of buildings. Most of the castles on this list will not stand up to that definition. Alas, that is not the only definition offered. The alternate is much more fitting for our list – a massive or imposing house. Sorry if I got your hopes up, but there are no medieval fortresses tucked away in the corners of the state overlooking one of the Great Lakes.

Some of the more famous “castles” in Michigan aren’t buildings at all, they’re (extremely cool) geologic formations that don’t qualify for this list according to our agreed-upon definition. So, you won’t find anything in regards to Castle Rock or Miners Castle at Pictured Rocks (below). These are definitely places you’ll want to see, but they’re not technically a part of this list. 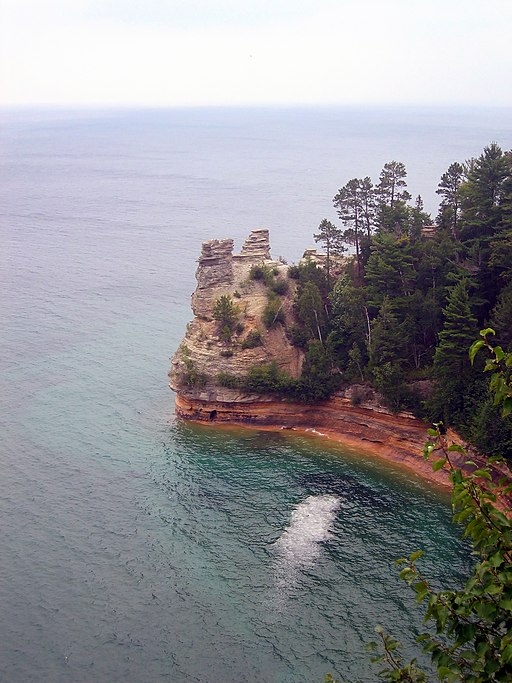 Now that we’ve gone ahead and defined our terms, let’s walk through the state’s castles to see if you can find one to visit near you on your next Michigan getaway.

Attached to the legendary Bavarian Inn restaurant in Frankenmuth, the Castle Shops carries the look of a proper German castle. Before or after your delicious dinner you can swing through the Castle Shops to find a fine assortment of German wines and cheeses as well as an astonishing collection of souvenirs. At the very least, grab a photo on your next trip through Frankenmuth to stock up on Christmas supplies at Bronner’s.

Michigan State has quite a few iconic pieces of architecture on their campus but few stick out like the Beaumont Tower. Completed in 1928, the tower was designed in a gothic style and was meant to be a monument to teaching and was the brainchild of a former student, John W. Beaumont, an 1882 graduate.

Who doesn’t want to get married in a castle? When it comes to castles in Michigan for weddings, Castle Farms is hard to beat as far as wedding destinations go. Located in beautiful Charlevoix, this 103 year old castle hosts events of all types, including weddings, receptions, private parties, and festivals. 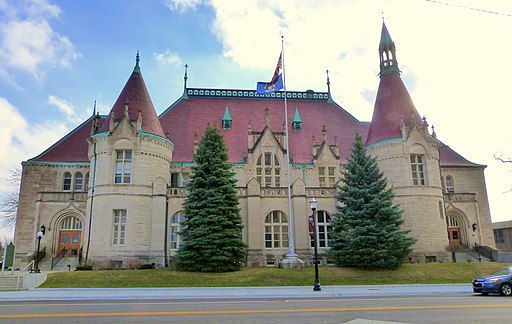 Did you know that Saginaw had a significant French history? Few do. The Castle Museum was designed to honor the area’s French heritage and contains not only items of local interest, but statewide archaeological and historical exhibits.

Located on the University of Michigan campus, the Law Quadrangle consists of five buildings constructed in the Tudor gothic style. It took a decade to finish the buildings which were completed in 1933. Former student William Cook (graduate 1880, 1882) initially wanted to endow a professorship, but ultimately made donations that made the development of the Quadrangle possible.

You could be forgiven if you drove down M-52 in Owosso and drove right past Curwood Castle. It’s easy to miss if you don’t know where you’re looking, but this beautiful castle was a Norman Rockwell replica that you should take time to see. It was completed in 1923 and served as the studio of famed author James Oliver Curwood. These days the castle is one of the most visited tourist spots in Mid-Michigan and hosts a museum that is open to the general public.

Designed by Loui Kamper for the now ridiculous price of $46,000, the Eighth Precinct police station came about as a necessity after the previous headquarters on Trumbull had been closed in 1901. The building was utilized by police in West Detroit for a variety of purposes over the years before recently being converted into loft housing as part of a revitalization project along Woodbridge.

Grand Army of the Republic Building

Constructed in 1942, this Detroit castle is constructed on an awkward triangular lot on the northwest side of Detroit. Initially, the building was meant to serve Grand Army of the Republic members, the building included offices and a bank. Over time the building was vacated and changed ownership on multiple occasions. In 1986 it was added to the National Register of Historic Places.

If you’re looking for a castle in Michigan to stay at, look no further. The Henderson Castle in Kalamazoo is a luxurious bed and breakfast in one of the best parts of Kalamazoo. Located a short walk from the downtown nightlife, theaters, and shopping, you’ll also get a lovely view of downtown. During your stay expect some of the finest French cuisine you’ll find in the Midwest.

Another Michigan castle that’s a popular wedding destination, Meadow Brook Hall in Rochester is a national historic landmark. Matilda Dodge Wilson, widow of John Dodge, built the building between 1926 and 1929. The history, and the Tudor-styled architecture earned this historic home a spot on the list of National Historic Landmarks. Today you can take a historic tour, or host weddings and corporate events at the space.

Housing the Kelsey Museum of Archaeology, this tiny castle is one of the most unique spots you’ll find on the University of Michigan campus. You can virtually check out some of the exhibits via their website.

The most famous building on Wayne State’s campus in downtown Detroit, this was originally built to be a high school. Ground broke on this historic beauty in 1894 and it was completed in 1896. These days it houses WSU’s College of Fine, Performing, and Communication Arts. 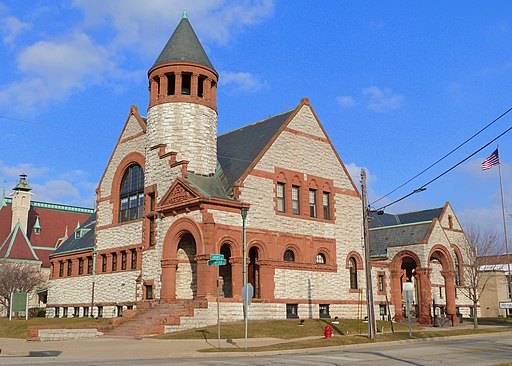 Another Saginaw castle, this piece of Mid-Michigan history opened in 1891 after being designed by Eric Pinchet. The historic library is open to the public and houses extensive genealogical records of the surrounding area.

It wouldn’t be a post on this site if we didn’t mention a Michigan brewery. The Upper Peninsula Brewing company, however, is the only one to make our list of castles! While small in stature compared to the rest of our list, the building also known as the Charles Meeske House serves up cold craft beers to thirsty customers in Marquette. Named after brewer Charles Meeske, the building was completed in 1893 and was originally built to serve as a slaughterhouse. It was eventually turned into a brewery and served as Meeske’s home and office during the time he ran the business.

Find a Michigan castle near you!