I’ve been around long enough to know the major debate on pizza over the decades has been about Chicago-style deep dish versus New York’s thin crust version. And while I personally find both delicious, I have found myself falling in love with Detroit-stye pizza the older I get, and I think it deserves its place at the table. Unfortunately, outside of Michigan, Detroit-style pizza is a mystery to most.

What is Detroit-style pizza?

Unlike some more radical variations of pizza like Beto’s crazy cold topping concoction in Pittsburgh, Detroit’s version is one that will make sense to most standard pizza eaters. To start off, the pizza dough is a deep dish crust that is pressed into the walls of a square pizza pan. After, toppings are placed on with cheese. We mean lots of cheese. This allows the edges of the crust to caramelize while it’s baking. The end product is a thick crust pizza that’s light and airy on the inside with crispiness on the outside. 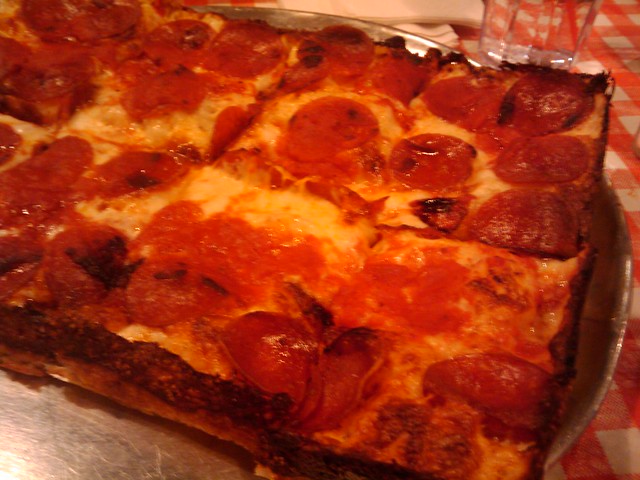 It all started in 1946 when Gus Guerra decided he wanted to add new menu items at his local neighborhood bar, Buddy’s Rendezvous at 6 Mile and Conant, which wasn’t doing so great at the time. He ended up getting a few oddly shaped, industrial grade steel trays from a friend that he would experiment with. He thought that by using these trays, he could create a great Sicilian-style pizza, despite the rectangular shape of these trays. Boy, was he right. After this, his wife Anna got an authentic pizza dough recipe from her family in Sicily and things took off from here. The Detroit-style pizza we all know and love was born with its deep-dish roots in Sicily.

Where can you get Detroit-style pizza?

Obviously, the original Detroit-style pizza can be found at Buddy’s now with 11 locations spread throughout Metro Detroit. However, many other places have put their own spin on the Detroit-style pizza to make a name for themselves. Jet’s Pizza, a Michigan based pizza chain, also took the idea of the Detroit-style pizza and has been ranked among some of the top pizza places in Michigan by locals. Jet’s made the brilliant move of making smaller “four corner” pizzas so every piece is a corner. I want to hug the person who made this decision every time I have a slice of Jet’s.

This pizza hasn’t just stayed in Michigan, though. There are locations throughout the United States who have a well-established following for their own version of Detroit-style pizza including Via 313 in Austin or Northside Nathan’s in Las Vegas just to mention a few.

Regardless of where you’re living in the United States, make it a priority to get your hands on a Detroit-style pizza one day. Preferably at one of the original locations in Detroit, but any of the others that have been mentioned will do if you don’t have a trip to the Mitten lined up in the near future. This style of pizza is one that pizza lovers of all stripes tend to enjoy because it is just delicious – plain and simple.