When friends or family come to visit me from out of state they tend to point out just how painfully flat Michigan is. This is, of course, true to some extent, but influenced further by the fact that I’ve lived the past 13 years in either Lansing or Grand Rapids which are both notoriously hill-less. As the state coming in 38th on the list of highest points, Michigan doesn’t hold a candle to Alaska or even New Hampshire, but there are a some (relatively) high points sprinkled around the state that might surprise people who’ve only experienced the flattest portions of our fair state.

The highest of Michigan’s high points

Mount Arvon, located in Baraga County has the highest elevation in Michigan at 1,978 feet. In recent years there have been improvements to the road leading up to the peak making access much easier for those who want to visit. Unfortunately, the U.P. weather being what it is, Mt. Arvon isn’t really a year round location to visit. Most folks will want to wait until the 300 or so inches of snow finally melts off by late summer before making the trek. If you’re a brave winter sort you can try snowmobiling, but a cross country or snow shoeing trip will be around an eight mile adventure if you dare try that. When you reach the top of Mt. Arvon there’s a blue mailbox for you to register and from there you can take a short walk north to see an amazing panoramic view of Lake Superior which the peak rises over 1,300 feet above.

Looking to visit? Use the map below to find directions to Mt. Arvon.

Lodging options near Mt. Arvon aren’t all that plentiful if you plan on visiting, but here are a few links that might prove helpful:

I had to do a double take on that one myself, but it turns out it’s true. If you’re not sure what prominence is (like I wasn’t at first) here’s Wikipedia’s definition:

“Prominence characterizes the height of a mountain or hill’s summit by the vertical distance between it and the lowest contour line encircling it but containing no higher summit within it. It is a measure of the independence of a summit.”

So, basically, it’s what appears to be the highest point in Michigan based on the surrounding topography. So where is this magical majestic lower peninsula peak? Briar Hill in Wexford, Michigan. With a prominence of 1,041 feet, it’s almost 100 feet more prominent than Mount Arvon which stands a mere 948 feet above its surrounding topography. 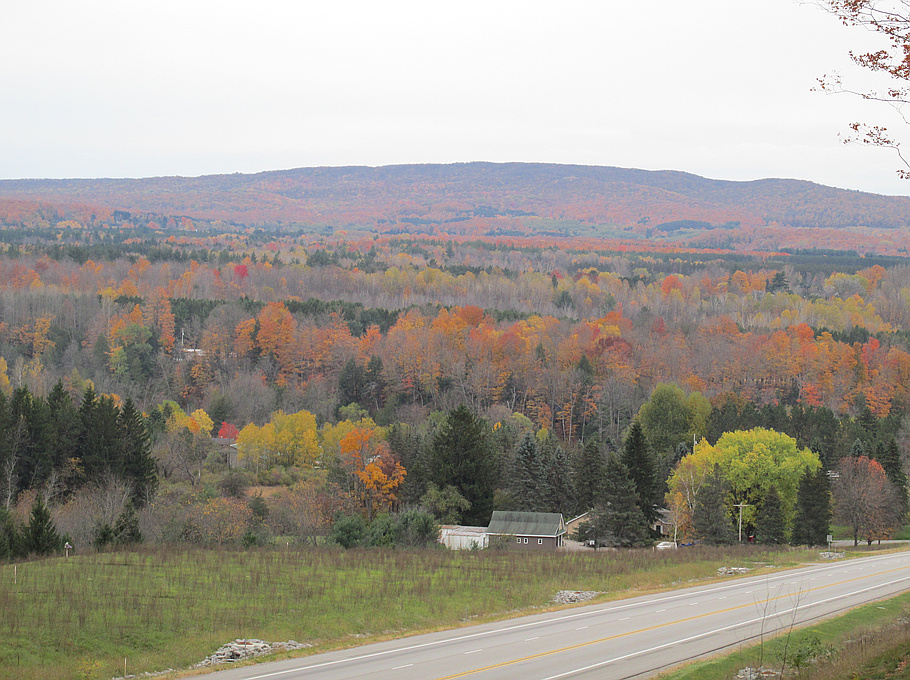 Briar Hill, located south of Traverse City, is located in the Northeast corner of the Huron-Manistee National Forest. This whole area is a popular place for outdoor activities like camping, hiking and kayaking. If you’re interested in making the hike, there are more details on that available here.

Up until the early 1980s, it was also the home of a ski hill. There’s still skiing relatively nearby at Caberfae Peaks if that’s something you want to do during the winter.

Looking to visit? Use the map below to find directions to Briar Hill.

Lodging options near Briar Hill are abundant. Here are some links that you may find useful if you decide to try to scale the lower peninsula’s highest point:

Do you have a favorite high point in the mitten? If so, let us know in the comments below.